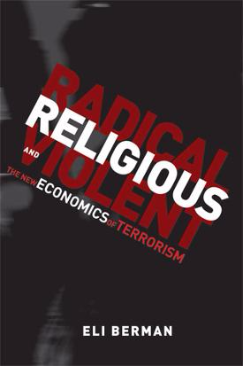 How do radical religious sects run such deadly terrorist organizations? Hezbollah, Hamas, Lashkar-e-Taiba, and the Taliban all began as religious groups dedicated to piety and charity. Yet once they turned to violence, they became horribly potent, executing campaigns of terrorism deadlier than those of their secular rivals.

In Radical, Religious, and Violent, Eli Berman approaches the question using the economics of organizations. He first dispels some myths: radical religious terrorists are not generally motivated by the promise of rewards in the afterlife (including the infamous seventy-two virgins) or even by religious ideas in general. He argues that these terrorists (even suicide terrorists) are best understood as rational altruists seeking to help their own communities. Yet despite the vast pool of potential recruits—young altruists who feel their communities are repressed or endangered—there are less than a dozen highly lethal terrorist organizations in the world capable of sustained and coordinated violence that threatens governments and makes hundreds of millions of civilians hesitate before boarding an airplane. What's special about these organizations, and why are most of their followers religious radicals?

Drawing on parallel research on radical religious Jews, Christians, and Muslims, Berman shows that the most lethal terrorist groups have a common characteristic: their leaders have found a way to control defection. Hezbollah, Hamas, and the Taliban, for example, built loyalty and cohesion by means of mutual aid, weeding out "free riders" and producing a cadre of members they could rely on. The secret of their deadly effectiveness lies in their resilience and cohesion when incentives to defect are strong.

These insights suggest that provision of basic social services by competent governments adds a critical, nonviolent component to counterterrorism strategies. It undermines the violent potential of radical religious organizations without disturbing free religious practice, being drawn into theological debates with Jihadists, or endangering civilians.

You can follow Prof. Berman's updates on the topics of religion, economics and violence under "clubmodel" on twitter.